I fly Frontier, proudly, knowing at any juncture a flight might be late or canceled. Once I drove back from Tulsa to Denver because (1) the flight was canceled and (2) the Frontier employee told us, “Oh, and we don’t fly out of Tulsa tomorrow, so you’ll have to find a different airline.”

The prices entice me. They remain low as long as one does not carry on luggage or check in bags. My “personal item” stowed beneath the seat in front of me holds my clothes, sleeping bag, this laptop upon which I write, and all the electronic accessories I need, including chargers and a head lamp.

In addition to wearing layers of clothing, I also wear this running belt which holds my water bottles, my phone, IDs, toothbrush, sunscreen, and that kind of stuff: 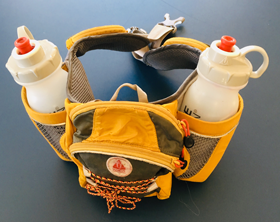 So, for $75 round trip, I’m headed to Las Vegas, where I will rent a car (that doubles as a motel room) in order to drive to Zion National Park, about 180 miles north east. Yes, I feel a bit smugly I’ve beat the system.

During the flight, the man to the left of me watches a movie on his tablet. He’s a handsome black man who I think might be performing in Las Vegas (except, why’s he sitting in this cramped row?). He occasionally glances over as I lose several games of chess against the machine on my phone. When his movie finishes, he invites me to play chess on his tablet.

We play, I win, we talk. “My ticket was $72 round trip, and everything I need is here” (he points to his personal item) “in this big old laptop case…everything.” He’s not performing it turns out, just recreating. He pastors a church in Aurora, Colorado called “Life by Design.” It’s snowing right now in the Denver area, so he and I have made a timely break.

Then, the man to my right speaks up. He looks like a retired investor who might gamble, not worrying about the outcome. I’ll call him Howard because perhaps he owns Las Vegas. “I’m from Las Vegas. My girlfriend has a house in Denver and one in Florida, so I keep a change of clothes both places and just fly with whatever I’m wearing.” I don’t think he’s related to Hughes family. No, he’s one of us. We are the rogue row.

Flight arrived in Las Vegas very late; shuttle took me to the car rental area and then a second shuttle took me to the off-campus rental area, which, like Area 51, was somewhere in Nevada. (It wasn’t that bad.) Thus, it was about 3AM when I arrived in the car at Hurricane Cliffs, some Bureau of Land Management land with designated camping spots, dusty but free. As planned, I slept in the car with my little down bag.

In spite of all that, I was ready to go in the morning, driving to Springdale to eat a breakfast and catch the shuttle to another shuttle (this is turning into a story about shuttles), the second one taking us into Zion Canyon. I chose to get off at the Grotto Trail, which involved a short, scenic walk to the West Rim Trail, the trail that leads to Angels Landing.

“Trail,” in this case, is a concrete path that reduces trail maintenance immensely. From where I embarked at Grotto Trail to the top of Angels Landing is ~5.5 miles, round trip. As it turned out, I walked farther after ignoring the turnoff to the final half mile ascent to Angels Landing.

Walter’s Wiggles end at Scout Lookout, as does the concrete part of the trail. The Lookout is the place where hikers who fear heights usually stop before turning back, and it is the place where other hikers rest before making the more strenuous half mile to the top. There’s a bathroom to encourage the break.

The Lookout is a kind of beach (there’s sand but no water). Just beyond it, one proceeds to climb the Spine (aka the Hogsback)—the part where chains are provided to keep many of the hikers at ease and alive, not that experienced climbers would be gripping them too tightly.

When I arrived at the Lookout, dense clusters of hikers were sitting or standing. Here it was, the end of October and a week day, jam packed. Twelve-years earlier when I hiked Angles Landing, far fewer people gathered in the middle of June.

The crowd being large, I instinctively bee-lined my way to the continuation, not realizing I was now on the wrong trail. Suddenly, the crowds were gone, almost magically, and I kept thinking, “Soon, I start up the route with chains.”


Happily making my way, thinking, “I don’t remember this at all,” I met a couple who disabused me of my error. That was fine and funny. This was the continuation of the West Rim Trail which connects with other trails, allowing one to hike about 17 miles each way, all the way from the floor of the canyon (where I started) to Lava Point, requiring over 3,000 feet of elevation gain.

I followed the trail for a few miles, loving the variety in landscapes that each twist and turn provided.

Upon returning to the Lookout, I went to the foot of the chains, asked myself whether another rigorous mile would be good for today’s distance, and decided I could come back in a day or two if I wanted.

Wanting neither a strenuous hike the next day, nor to pay the required $15 parking in Springdale, I opted to drive State Route 9 to the east entrance of the park, where the trail head for the East Rim Trail lies.

My final day was sunny, although the temperature had fallen to 14 degrees F during the night, making me glad I could turn on my car heater occasionally. Starting later than I planned, I drove off to Springdale to eat and park.

The temperature was so cold that the credit card reader for the parking lot failed, so I drove to the (well named) Park House Cafe, which sits at the far end of Springdale, away from the entrance to the park. My plan was to ask them if I could park there for the morning for $10. But the nicest woman in the world (at that moment) would hear nothing of it and told me just to park and enjoy my hike.

The number of people that have died while hiking Angels Landing in the last 100 years is 8 to 17, depending upon the source. One young woman died after this post was published.[1] According to one source, “Its been called one of the scariest hikes in the world. It’s been the site of numerous accidents. It’s even been called ‘scarier than dating Taylor Swift.’”[2]

Considering the thousands of hikers who climb Angels Landing each year, that is a small percentage. It’s safer than driving on a freeway. Still, the inevitability of death if one should trip without a hand hold is great. In 2009, a 55-year old woman died: no novice, she was an experienced hiker who had been to Angels Landing several times.[3]

Time-lapse without an Action Camera

Having hiked Angels Landing years ago, I wasn’t too concerned about the danger, although it did seem a much longer trail this time. And I did hold onto the chains more frequently. It’s funny the things that concern me, but I didn’t want to fall for several reasons, one of them being that the nice woman in the cafe might regret having to get a rental car off her lot.

My camera takes pretty good footage when I’m holding it steady, and in the following video, the less-steep switchbacks along with Walters Wiggles come out nicely. From there on, it’s a crap shoot (which is how some of the hikers were feeling about the heights): all I could do was put my iPhone in my shirt pocket and capture what video I could until the battery died. The final movie is, as Hamlet once said, a knavish piece of work, but it’s only two and a half minutes long.[4]

Perhaps I set a record for the shortest stay on Angels Landing. I saw people breaking out elaborate lunches and taking extensive videos. But I had only a cup of water remaining and a dead battery (the photo of Angels Landing in the video above being from my 2007 visit). Besides, I’m not good at drawn-out hikes.

So I looked around and started down. One fellow, Omer, passed me on the steep part, but on switchbacks, I caught up with him. We were both the obvious front runners in this race that only I knew about. Omer was stopping to take photos—oblivious of the time. But he walked fast, perhaps in part because he had just emerged from four years of service in the Israeli army. He didn’t say so, but I think he was making up for lost time. This stop in Zion was, it turned out, only a prelude to his upcoming six-month stay in South and Central America. After that adventure, he is returning to attend college in Tel Aviv.

We caught the same shuttle back to Springdale. At one point, a fellow passenger, a man with a grumpy voice, said rather loudly, “This place is filled with rocks.”

Omer and I looked at each other and smiled. The man said it without a hint of irony.

Reaching my car, I drove to La Verkin to do a little work at a coffee shop that had caught my eye earlier.

After that, it was to the airport in Las Vegas and back to Denver, where the snow was beginning to melt.

[2] “What Does it Really Take to Hike Angels Landing?”.

[3] “Fatal Fall from Angels Landing in Zion National Park”—the comment that refers to the woman as the writer’s “sister” describes her as a level-headed, experienced hiker.

[4] YouTube video: “Angels Landing – Zion National Park”—for a better sense of the trail and views of Angels Landing, I recommend this 2-minute video taken with an action camera.